MILWAUKEE, April 8, 2014 /PRNewswire/ -- The more discipline an individual brings to financial planning, the more financially secure he or she feels in the present, and the greater likelihood they'll be happy in the future, according to a study released today by Northwestern Mutual.

To view the multimedia assets associated with this release, please click: http://www.multivu.com/mnr/7100751-northwestern-mutual-study-link-planning-discipline-happiness-retirement

These are the first set of findings from the 2014 Planning and Progress Study, an annual research project commissioned by Northwestern Mutual that explores Americans' attitudes and behaviors toward finances and planning. The study found that:

"Happiness can't be bought, of course, but it can be planned for," said Greg Oberland, Northwestern Mutual executive vice president. "The links between discipline, financial security and happiness are quite distinct. There's some powerful evidence to suggest that the small steps you take today can make a real difference tomorrow."

Oberland noted that the overall level of discipline that Americans bring to their finances remains low. According to the study:

Additionally, 60% of all respondents in the study believe their financial planning could use improvement; and the number one roadblock, cited by more than one in four (27%), is lack of time.

Who are the Most Disciplined Financial Planners in America?

Younger adults (18-39) and more senior adults (60+) have something very important in common – they represent the most disciplined financial planners in the U.S.  Meanwhile, adults who fall between ages 40-59 are the most financially unprepared and most likely to identify themselves as Informal or non-planners.  The study found:

"It's interesting to see the differences in discipline among age groups, and whether they signal a pronounced shift in attitudes toward financial security in America," said Oberland. "It's worth noting that both young adults and seniors have experienced tough economic cycles during formative periods of their financial lives. Regardless of the explanation, we see the return to realistic expectations, prudent decision making and disciplined patience as a very positive trend."

Do Young Boomers Have Their Heads in the Sand?

The study found that 60% of the youngest Baby Boomers (50-59) acknowledge the need to improve their savings and investing discipline, yet they have the least appetite for doing so. Why the disconnect?

Additionally, among these young Boomers:

"Becoming financially disciplined is often a matter of priorities," said Oberland. "We work with young Boomers all the time, helping them juggle what can sometimes feel like financial overload.  That's why the most critical piece is to address the issues head on rather than putting one's head in the sand."

The 2014 Planning and Progress Study explores the state of financial planning in America today, and provides unique insights into people's current attitudes and behaviors toward money, goal-setting and priorities.

This study was conducted by Harris Poll on behalf of Northwestern Mutual and included 2,092 American adults aged 18 or older who participated in an online survey between January 21, 2014 and February 5, 2014. Results were weighted as needed for age by gender, education, race/ethnicity, region and household income. Propensity score weighting was also used to adjust for respondents' propensity to be online.  No estimates of theoretical sampling error can be calculated; a full methodology is available. 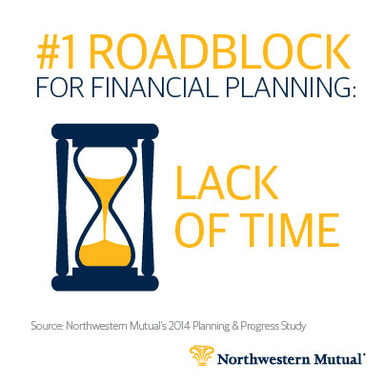 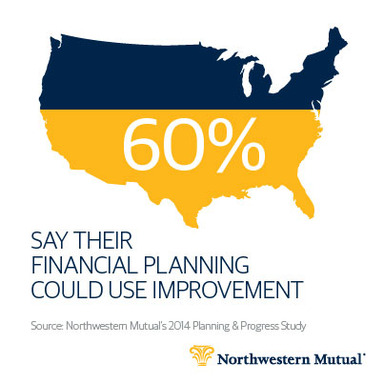 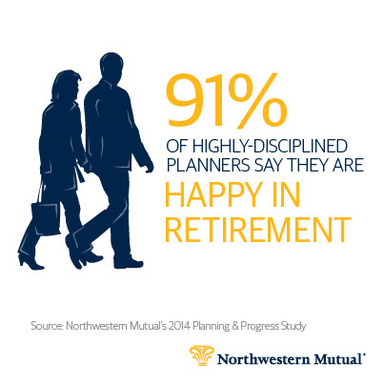 To view the multimedia assets associated with this release, please click: http://www.multivu.com/mnr/7100751-northwestern-mutual-study-link-planning-discipline-happiness-retirement